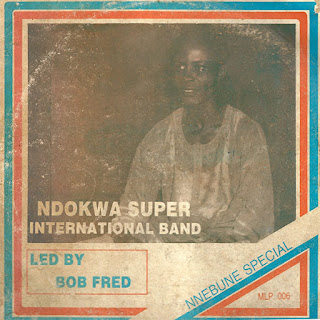 It has been some time, so to make it up to you a nice long track by a fine band, Bob Fred's Ndokwa Super.
Bob Fred was guitarist with the International Brothers when Rogana Ottah and Franco Lee Ezute were also bandmembers.
His later records were with the Ukwani Brothers and Ndokwa Super.
Haunting percussion, fine guitars, nice vocals and the occasional horn, who could ask for more?
Bob Fred - Nnebune Special-Mejenechi