When in the 1980's highlife modernized and all kinds of electronics were introduced, eventually Highlife turned Hiplife. Not my thing really, but most Ghanaians now see highlife as something from the past. One of the artists who tried to keep the tradition alive was (and is) Eric Agyeman. Starting out as lead-guitarist in K.Gyasi's Noble Kings, he developed a unique kind of mellow guitar-band Highlife with horns, often in long, suite-like tracks.
Here is one of his less known albums. 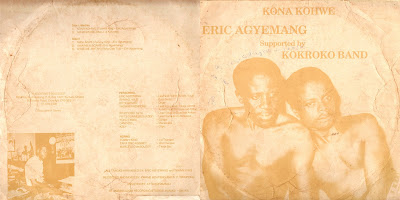 Mani Agye
(Strange cover, not? Even George Michael wouldn't dare something like this..)
Posted by Akwaboa at 6:21 AM 7 comments: