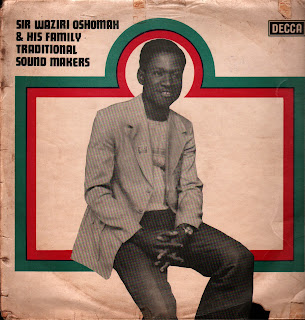 Rogana Ottah and the Black Heroes 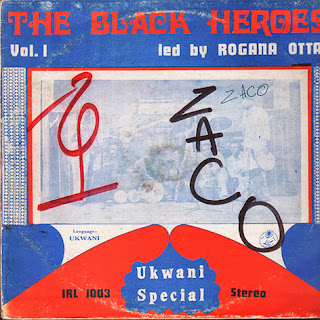 Let me quote from John Beadle:
'Guitarist Isaac Rogana Ottah, "The Oshio Super King," a prolific artist from Akoku, Ndokwa LGA, Delta State, is one of the better-known Anioma musicians. His musical career began in the early 1970s when he played in the bands of Chief Stephen Osita Osadebe and Rex Lawson. In 1973 he joined fellow Ndokwa native Charles Iwegbue and His Hino Sound Band. Striking out on his own after Iwegbue's tragic death in 1976, Ottah scored a major hit with his first LP, Ukwani Special, in 1977. In quick succession a series of outstanding recordings, notably the "Oshio Super" series, propelled Ottah to the vanguard of the Anioma recording scene. Although his career slowed after the 1980s, he still made a prosperous livelihood as a touring musician into the early years of the 21st century.
I have received reports that Rogana Ottah passed away several years ago but have been unable to confirm them.'

Here is one of his greatest hits, the 'Ukwani Special'


P.s. my motivation to post music has been low, lately. But i understand that there are some people out there that appreciate this music, so this is for you.
Posted by Akwaboa at 12:33 PM 10 comments: